Why do I need an LED Driver ?

LEDs are constant current devices with a forward voltage requirement. This means the voltage from the driver must exceed the minimum  in order for the current to flow and "light" the LED, by controlling the current, you control the intensity, the lower the current the less intensity but too much current will cause the LED to degrade at a faster rate due to over heating and will fail early. 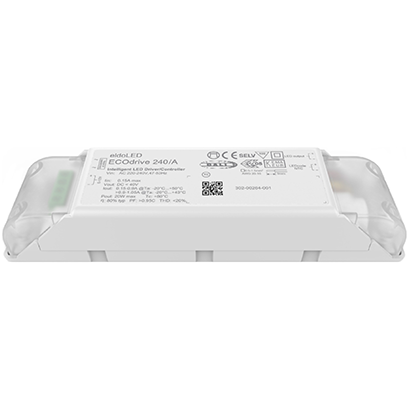 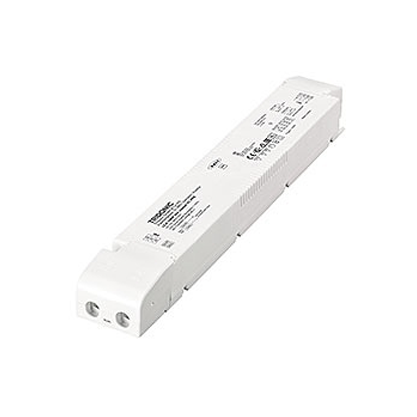 When we talk about dimming the focus is on the control method to the driver,e.g. Dali, 1-10v and phase, this is the control side, what we don’t talk about the driver dims the brightness of LED. There are Two Options:

If the normal current is 700mA and we reduce the current to 350mA and will get approx. 50% light reduction. If we can change the current output of the driver from 0mA to 700mA we will get 0-100% brightness. This is called "continuous current reduction". The problem is that as you reduce the amperage to the LED its characteristics change, it becomes more efficient, so the dimming curve is non linear ( the eye does not see 50% electrical reduction in power as 50% reduction in light, the retina delates and allows more light in as you dim) So we need to dim harder and harder at lower levels.

This is switching the output of a driver on and off really quickly, typically min of 300 Hz a second. The eye can't see high frequency switching over 120+/-  times per second, so the eye sees a reduced brightness. If you want to dim 50% you turn the power to the LED off 50% and 50% on each second at high frequency. This works really well until around 30% or lower dim levels. At these low levels there is a lot more "off" than "on" time …. This can be seen as flicker. At very low dim levels the LED could be lit only on 1 in 99 cycles. There are now standards for minimum flicker due to negative health effects, IEEE P1789

2. Hybrid both CCR and PWM

Some suppliers have taken the best of both brightness reduction techniques and combined them into one, the best known is EldoLED which uses PWM 100 to 30% and CCR 30-0% but mixes the two with every clever software. EldoLED also market a product range called “dim to dark” this down to 0.1% then off all within the flicker standards. Note – "Warm dim: LEDs must use CCR or EldoLED, they don’t work with PWM. This is a good example of the complexity of LED’s and their drivers, it requires years of experience from trusted suppliers

What is the max amperage ?

What is forward voltage ?

Forward voltage is the amount of voltage required to make the LED "light" (the voltage creates a flow of electrons across the “band gap” this creates blue spectrum light that is converted to white light via the phosphors) The LED will have a forward voltage specification e.g.  Modular Smart Lotis 82 is 17.1 -19.8Vf at 500mA. Its a range because LED chips are “grown” in high pressure ovens and like children they are not exactly the same. A single LED chip is around 3Vf.

Some times the Vf is expressed as “typical” this is to simplify the spec. and will be the average. 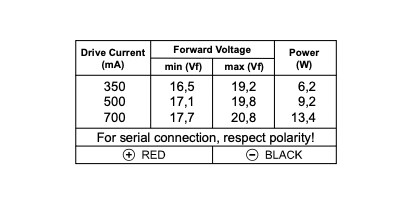 Drivers are more electrically efficient at max load, so try and select a driver as close as possible to its max (But not too close …) Some drivers have a very wide Vf like EldoLED 20w 2-40VF this means it will work with almost anything …… the downside is more expensive circuit design and if only loaded with a single LED chip at 700mA its 3.4VF x 0.7amp = 2.4w load on a 20w driver. Driver consumption is around 3 watts plus the load, so 5.4w for a 2w LED …

Think about three batteries in a torch end to end, each battery is 1.5v and you have the positive end on the negative end, this gives a total of 4.5v, the voltage is added but the power (current) remains the same. This is series wiring. If you join the three positives together and the three negatives together the voltage will remain 1.5v but the power increases by 3 times, this is parallel wiring. 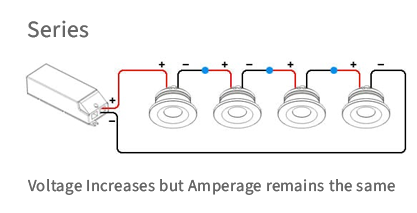 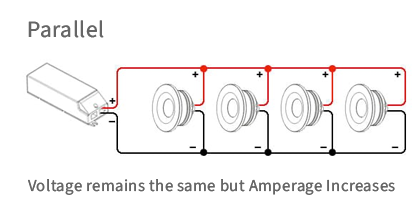 99% of cases we wire LEDs in SERIES, the Vf increases and the amperage remains the same. As most LED fittings are SELV (Safe extra low voltage) less than 60vDC this limits the quantity of LED we can wire in series. We can't exceed 60vDC 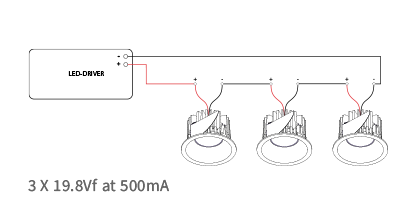 We do regularly wire small wattage LED fixtures in series, these have one LED with a voltage of 3.2Vf at 500mA, so the maximum we can wire is 60v / 3.2v = 18.  In practice we would limit this to 12 to 15 to allow tolerance in the wiring from driver to LEDʼs (there is volt drop along the total cable length, the danger is that there is not enough forward voltage to light all 15 fittings)

In an example of outdoor step lightning it makes sense to use one remote driver to power all 12 fittings. The Vf requirement is 12 x 3.2v = 38.4v it is wise to use a driver that has a higher forward voltage eg EldoLED 30w Solo which has a Vf of 2-55Vf, this allows a voltage drop along the cable of 55v - 38.4v of 16.6v, this is enough for say 30mts of cable. If the cables are long and the Vf load high it is worth asking the electrical engineer to calculate the volt drop along the cable. This is the load (amps), the resistance of the cable (bigger cable less resistance), and the length in Mts 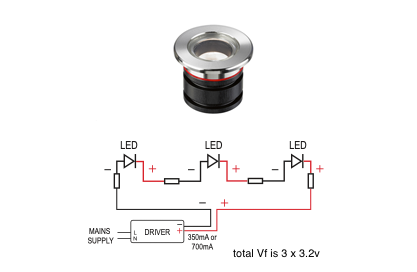 We rarely wire in parallel (voltage remains the same but amperage increases)in this case the amperage of 2000mA is across the 4 fijngs so each fijng gets 500mA. The issue is that if a fijng fails we then have 2000mA across 3 fittngs which is higher than the max allowed, then another one will fail in Hme so 2000mA on 2 fittings. You can see the advantage of series wiring, if a fitting fails the current is constant and the voltage will vary to suit the load, hence our preference for EldoLED 2-55Vf , its OK to run 1 to 12 fittings on the same driver.

By the way your house is wired in parallel, maybe why electricians who mainly do houses struggle with LEDs.

How many LED’s on the driver ?

In many ways we have covered this. Most standard downlights will have one driver per downlight, easy. When wiring small LEDs in series we need to be look at amperage and forward volts. We supply our products as a package with fixtures and a suitable matched driver. We do not supply fixtures only, its just trouble.

This is generally advised to us in the request to quote, if we don't know we allow for Dali drivers as they are the most common in commercial lighing and the most expensive. See our blog Guide to popular LED dimming options. LEDs are complex fragile electronics and require knowledge and care. If in doubt please ask.